Cats marauding as ghost pirates, what more do you want?... 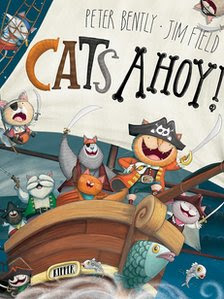 Yesterday saw 'Cats Ahoy!' being honoured as the lastest recipient of the Roald Dahl Funny Prize. The rhyming picture book, written by Peter Bently, was named the funniest book for children aged six and under and was articulately summised by chair of the judges Michael Rosen, 'Cats marauding as ghost pirates to steal fishy bounty from lily-livered humans: what more do you want from a funny book?'. Bently was honoured alongside Liz Pichon, whose book 'The Brilliant World of Tom Gates', a 'must for anyone who doodles, likes to wind up their sibling, has a serious caramel wafer habit and enjoys having their chuckle muscles exercised', won in the 7-14 category. Both were awarded prizes of £2,500.
Posted by Kathryn at 11:29