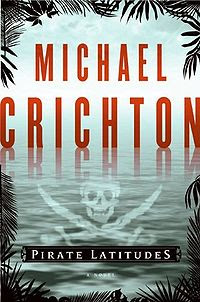 The first posthumous novel by author Michael Crichton, is set to be published this week. 'Pirate Latitudes', was discovered as a complete manuscript on Crichton's computer soon after his death in 2008, and centres on piracy in Jamaica in the late 17th century. Steven Spielberg has already signed a deal to adapt the novel for film. Another script, only a third complete, was found on Crichton's computer. A writer is to be selected to finished the 'techno-thriller' and it will be published in Autumn next year. Born in 1942, Crichton has been one of the few writers who is genuinely successful across the media; becoming the first creative artist to have works at number one simultaneously in television, film and book sales - ER, Jurassic Park and Diclosure respectively. The 6'9" author, has seen his novels translated into 36 different languages, over 150 million copies of his books sold and 13 of his works turned into films. Other famous titles include, 'The Andromeda Strain', 'Rising Sun', and 'The Great Train Robbery'.
Posted by Kathryn at 12:35