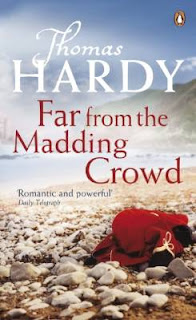 Thomas Hardy's 'Far From the Madding Crowd' was published in 1874. Like so many of Hardy's works, the novel originally appeared in serial form, debuting in 'Cornhill Magazine'; a Victorian literary journal illustrated, among others, by John Everett Millais. Having started life as an architect, 'Far From the Madding Crowd' was Hardy's first successful foray into the literary scene and only the second novel to bear his name; the first being the original cliff-hanger, 'A Pair of Blue Eyes'. It was also the first of Hardy's works to strike the tragic note for which he is best remembered, numerous aspects of the novel foreshadowing elements in both 'Tess of the d'Urbervilles' and 'Jude the Obscure'; yet, unlike his later works, the protagonist still manages to find happiness. The book finished 10th on The Guardian's list of greatest love stories of all time.
Posted by Kathryn at 08:00

Labels: Far From the Madding Crowd, on this day, Thomas Hardy