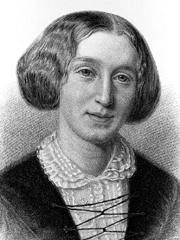 Victorian author Mary Anne Evans, later to be known as George Eliot, was born in 1819. Upon the death of her father in 1849, to whom she was devoted, Evans moved to London, where she stayed at the house of John Chapman; the recently installed editor of left-wing journal 'The Westminster Review'. Evans became assisstant editor a year later, contributing numerous essays and reviews until her departure in 1856. Evans' wider literary career was about to launch, yet it was her private life which gathered more public interest; she lived with, and considered herself to be wedded to, married journalist George Lewes. Socially unacceptable in the pious Victorian era, it was these circumstances that forced Evans to adopt pen name George Eliot to hide her marital status; an alias also used to distance herself from the romantic female novelists of the day. During her lifetime she produced many well known works of both prose and poetry; her most famous novels being, 'Middlemarch', 'Silas Marner', and 'The Mill on the Floss'. Evans died in 1880, aged 61.
Posted by Kathryn at 11:58