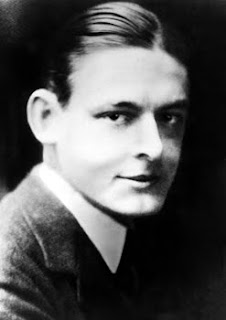 T.S. Eliot received the Nobel Prize for Literature 61 years ago today. The American, as one of the most popular poets in the modern era, was recognised for 'his outstanding, pioneer contribution to present-day poetry.' He studied at both Harvard and Oxford, later deciding to reside permanently in England and became a British subject in 1927. Eliot's literary career started whilst he was working at Lloyd's Bank, founding a critical quarterly 'Criterion', and writing his first poem 'The Love Song of J. Alfred Prufrock'. This work was the first of Eliot's 'new' style of poetry, identified through fragmented images and use of blank verse; a style epitomised in Eliot's most famous poem 'The Waste Land'. Eliot died in 1965, aged 76.
Posted by Kathryn at 19:45