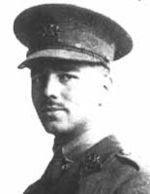 The famous war poet, Wilfred Owen died in action in 1918 at the age of 25; just one week before the war ended. His poems are known for their realism, as can be achieved only by one serving in the trenches as Owen did. Incorporating images such as 'the cautery of battle' and 'the blood had clogged their chariot wheels', Owen provides a great contrast to the patriotic poems of Rupert Brooke. Brooke, author of the lines 'there's some corner of a foreign field/That is forever England', never served in war and so, whilst his poetry was equally successful, it lacked the harsh truth and rugged images contained in Owen's. Owen's most famous works include 'Dulce et Decorum Est', and 'Anthem for Doomed Youth', yet only five of his poems were published in his lifetime.
Posted by Kathryn at 19:24