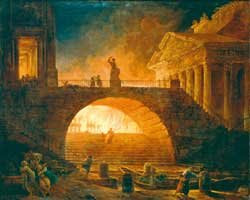 The Roman poet Marcus Annaeus Lucanus, better known as Lucan, was born in 39AD. Brought up under the tutelage of Seneca the Younger, Lucan's success was found under the reign of Emperor Nero, to whom he became a close friend. Yet a feud between them occured, leading Lucan to write several poems insulting Nero such as 'De Incendio Urbis' (On the Burning of the City), in which he is reputed to have described the Emperor as a 'criminal tyrant'. In 65AD, Lucan joined a conspiracy against Nero, and once his treason was uncovered he was obliged to commit suicide at the age of 25. Tacitus writes that as he died, 'he recalled some poetry...in which he told the story of a wounded soldier dying a similar kind of death. And he recited the very lines. These were his last words.' He is regarded as one of the best poets of the classical Latin period.
Posted by Kathryn at 17:28