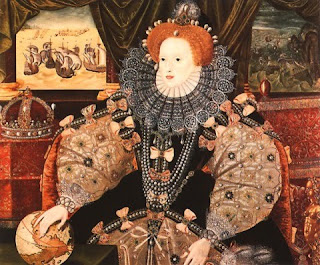 Queen Mary I, died in 1558; leading to the ascension of Queen Elizabeth I to the throne, and sparking of one of the greatest periods of literature in history. The Elizabethan era is, of couse, best known for dramatist and poet William Shakespeare. 25 of his 37 plays were purportedly performed during Elizabeth's reign, and she herself was known to be an admirer; the Lord Chamberlain's Men said to have performed over thirty-two times at court. Yet Shakespeare was not the only influential playwright of the era; contempories Ben Jonson and Christopher Marlowe are equally renowned, the latter possibly even more so in his lifetime. Elizabethan literature also widely contributed to the field of poetry, not least with the reinvention of the sonnet by Shakespeare, but also through the works of Philip Sidney and the first writings of John Donne; Donne was voted this year, the nation's second favourite poet. Other figures of the era include; Thomas Kyd, John Webster and Thomas Middleton. Much of this prolific writing continued into the Jacobean period.
Posted by Kathryn at 17:49