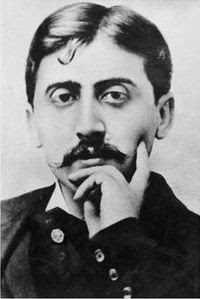 Marcel Proust, French novelist and essayist, died in 1922. Born in 1871, just after the Franco-Prussian War, much of Proust's childhood corresponded with the rise of France's Third Republic; a theme that later found its way into many of his works. He wrote from an early age, contributing to numerous journals while he was still at school and even founding his own literary review, 'Le Banquet'. Fascinated by English social critic contemporary John Ruskin, Proust began to translate Ruskin's works into French; yet his poor command of English hampered him, and instead Proust used him to enhance his own theories on art, and the role of art within society. His most famous work, 'In Search of Lost Time', often considered the definitive modernist novel, incorporates themes of time, space and memory. He died in 1922, aged 51.
Posted by Kathryn at 09:49