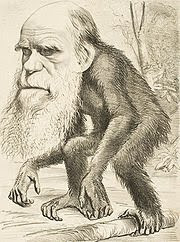 Charles Darwin's 'On the Origin of Species', was published in 1859. Considered the foundation of evolutionary biology, Darwin introduced the theory that a population evolves through the process of natural selection. The book included evidence that Darwin had gathered from his Beagle expedition across the Atlantic in the 1830s. Although at first the work incurred a hostile reception, it immediately sold out its initial print run and a further five editions were released before 1872. Perhaps one reason for the book's astonishing popularity, was its representation of a Victorian era seeing a growing divide between religion and science; many people were struggling with the faith that had previous been taken as incontrovertible and Darwin was giving this doubt a voice. Numerous Victorian literary figures encountered similar reservations, the most famous being Thomas Hardy, George Bernard Shaw and George Eliot. The two hundredth anniversary of Darwin's birth was celebrated earlier this year.
Posted by Kathryn at 17:34