Weisz of the right standard... 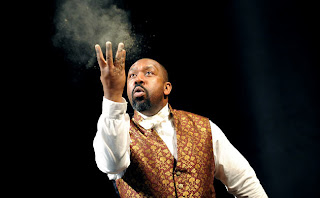 The winners of the London Evening Standard theatre awards were announced yesterday. After the nominations earlier this month, Lenny Henry won the Outstanding Newcomer prize for his portrayal of Shakespeare's Othello. At the ceremony, Henry joked, 'I must be the oldest newcomer there has ever been - which means there is hope for Bruce Forsyth's King Lear'. The accolade of Best Actress went to a 'thrilled and honoured' Rachel Weisz for her performance in Williams' 'A Streetcar Named Desire'; an award named after the late Natasha Richardson and presented by her mother Vanessa Redgrave. Sir Ian McKellen was the recipient of a special honour for his contribution to theatre, whose resume includes numerous plays by Shakespeare, Chekhov and Shaw respectively. Alexander Lebedev, owner of the Standard precised the ceremony by saying, 'What we have seen in the past year in London's theatres is innovative and inspiring.'
Posted by Kathryn at 18:48