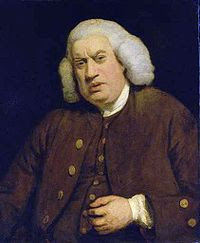 'Arguably the most distinguished man of letters in English history', Samuel Johnson, died in 1784 at the age of 75. A devout Anglican and Conservative, Johnson's literary career began by writing essays for 'The Gentleman's Magazine', and his other early works included biographies, poems and plays. His most famous work however, is that of a lexicographer and the production of the 'Dictionary of the English Language' in 1755. Described as 'one of the greatest single achievements of scholarships', Johnson's dictionary remained unsurpassed until the introduction of the Oxford English Dictionary, 150 years later. Johnson also wrote major works of literary criticism such as 'Lives of the Most Eminent English Poets'; supposed to have influenced Jane Austen's style and philosophy. He himself was also the subject of another writer's work James Boswell's 'Life of Samuel Johnson'. Due to reports of odd gestures and tics, many have posthumously diagnosed Johnson with Tourette's Syndrome.
Posted by Kathryn at 18:56